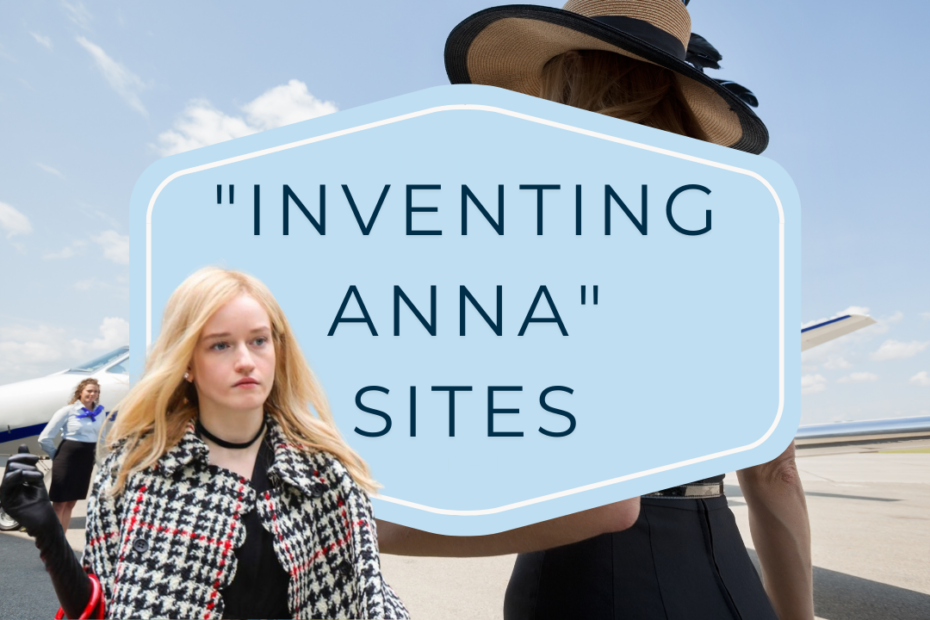 Are you as obsessed as I am with the Netflix series INVENTING ANNA? Since so much of the series took place in NYC, I was inspired to create an Inventing Anna Sites tour of NYC. Here are 7 INVENTING ANNA sites you can visit in NYC I hope you enjoy walking in the footsteps of Anna Delvey/Anna Sorokin as much as I did.

281 Park might be the quintessential INVENTING ANNA site in NYC.

281 Park was the building Anna targeted to be home for the Anna Delvey Foundation, aka ADF.

She even met with Gabriel Calatrava, son of Santiago Calatrava (the man who designed THE OCULUS at the World Trade Center). about how to convert the space.

If you’ve seen the series, you know how this story ends. Anna ended up a prisoner on Rikers Island and the Swedish photography museum Fotografiska moved in.

While ADF would have been glorious, I assure you that you’ll feel like as much of an art connoisseur as Anna looking at Fotografiska’s rotating collection.

12 George Hotel in INVENTING ANNA was based on 11 Howard in NYC.

This is where Anna stayed wracking up a bill o more than $30,000 despite not having a credit card on file. It’s also where the INVENTING ANNA character of Neff worked.

Anna of course managed to settle her debt, but only in the most Anna of ways.

If you visit 11 Howard, make sure to check out the restaurant attached to the hotel – Le CouCou. One of the most highly rated restaurants in the city.

After being kicked out of 11 Howard, Anna Delvey checked into The Mercer.

Rooms in this high-end hotel start at about $700 night!

I love knowing that the building of this hotel was originally built for John Jacob Astor II. The Astors were one of the wealthiest families in the U.S. in the 19th century. The type of family Anna Delvey wished he had been born into. The Astors had both money and influence.

After her mad-cap Morocco trip, Anna Delvey checked into the elegant Beekman Hotel.

Despite not having a credit card on file, Anna managed to wrack up a bill of $11,518 at The Beekman. She was evicted after just 3 weeks.

The Temple Court building of The Beekman became a designated NYC landmark in 1997. Anna Delvey seemed to gravitate towards hotels located in historic buildings. The Beekman was no exception.

By the time Anna Delvey checked into The W – Union Square, she was already a known criminal. She was kicked out of the hotel after just two days! Alas, for Anna, the hotel’s 270 rooms only go to paying customers.

The W – Union Square is located in a beautiful building dating back to 1911. It was originally the Germania Life Building.

While looking at the hotel, look for the letters GL on the exterior. They stand for Germania Life!

The courthouses are one of the most iconic INVENTING ANNA locations in NYC, because Anna spent much of the series on trial.

The courthouses featured in INVENTING ANNA are the Thurgood Marshall Courthouse and the Supreme Court building at 60 Center Street.

Anna is imprisoned on Rikers Island. You most likely won’t be able to visit Rikers Island, and even you get somewhat close to take pictures, guards often get suspicious.