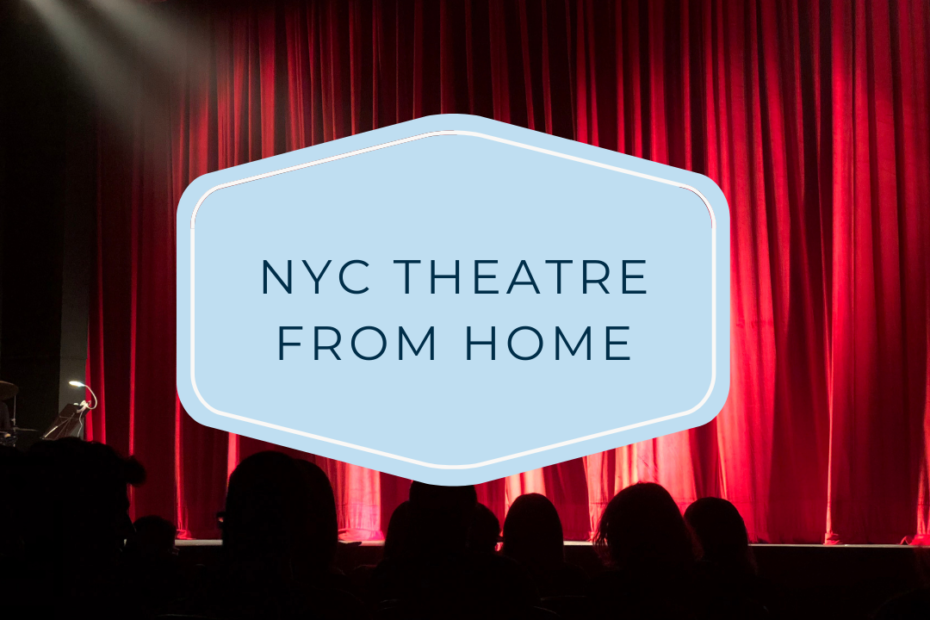 Despite our inability to gather, New York City personalities and institutions have continued to show us that theatre is indeed essential and can even thrive in the most unlikely of circumstances.

A really beautiful effect of New York City theatre temporarily moving on-line is that it has suddenly become accessible to the entire world.  Most of what has been created is free, and as long as you have access to the internet, you can watch stars of the stage presenting some truly memorable moments.  I’m going to share with you some of my favorite virtual theatre offerings thus far.

My favorite NYC Theatre experience of the quarantine so far has been the Sondheim 90th Birthday Celebration.

As a performer myself, I have often needed to create “self-tapes.”  This is where we record ourselves singing a song and send it to a casting team.  It’s usually used if we are out of town or unable to attend an in-person audition.  They are usually awkward and clunky, as the medium of musical theatre isn’t a natural fit for a tiny screen, and it changes how the audience perceives it.  However, each of the stellar performers taking part in the Sondheim celebration proved why they are the best in the business with their creative interpretations of Sondheim songs sung in self-tape style.  Three notable performances for me were Katrina Lenk’s rendition of “Johanna,” Laura Benanti’s “I Remember” sung slumped down next to her bathtub, and trio of divas (Christine Baranski, Meryl Streep, and Audra McDonald) singing “Ladies Who Lunch.”

I usually tell people that the Metropolitan Opera is my in-real-life “happy place.”  It has been a thrill to see their HD Performances.  A different opera is broadcast every day at 6:30 p.m. from the Met’s website.  Many of my favorite operas have been featured, and so many of my friends who have never attended an opera are suddenly all a-twitter about The Ring Cycle.  Opera is often thought of as an elitist art form, but the Met’s ability to make it accessible for all during quarantine has proven it’s truly for everyone.

On April 25th, the Met did a Gala from home, which was a huge technological feat in itself.  While art forms like dance and aerial lend themselves fairly easily to virtual platforms, it is nearly impossible to sync up live music due to a sound delay in applications such as Zoom, Skype, and FaceTime.  Somehow, the Met managed to bring together a huge numbers of instrumentalists and singers and created this masterpiece!

You can find other highlights of the Met at Home Gala on their official YouTube Channel.

If you want to be super fancy, you can dress up and have a date night like my boyfriend and I did a few weeks ago.

During a time of quarantine, when many of us our suffering emotionally, physically, and financially, we could all use a little Disney.  For the record, Disney’s mission statement is “to make people happy.”  To raise money for an incredible organization called Broadway Cares/Equity Fights Aids, Disney released footage of their “Disney on Broadway 25th Anniversary Concert” onto YouTube.

You will see Broadway and Disney stars singing some of your favorite Disney songs, as well as some exclusive interviews where you will hear how Disney actors are dealing with crisis, some uplifting words of inspiration, and some fun behind-the-scenes stories.  Also, Ashley Brown’s rendition of Feed the Birds is life-changing.  I couldn’t find a stand-alone version of it from the 25th Anniversary Concert, but here she is singing it at  Disneyland.

Rosie O’Donnell is another huge New York City and Broadway personality.  On March 22nd, she teamed up with Broadway.com for a #withme night of entertainment that included over 50 different stars of the stage and screen, ranging from Billy Porter, to Matthew Broderick, to Sarah Jessica Parker, to Stephen Sondheim, to Lin-Manuel Miranda, to Katharine McPhee, to Harvey Firestein, to Idina Menzel, to Randy Rainbow.

If you ever wanted to see Marissa Tomei’s impressive hula-hooping skills, this is your chance!

Broadway star Brian Stokes Mitchell sang out of his window at 7 p.m. to celebrate our essential workers.  His voice is one of the most luscious alive.  Brian Stokes Mitchell must also have the biggest heart on Broadway if not the world.  In every moment, he is able to find beauty and optimism.  Every single day, he uses his voice to spread that beauty and optimism to others.  Here is a quick glimpse of his concert caught on video for all to see.

How do you get to Carnegie Hall?  You  visit the world wide web!  Carnegie Hall has been presenting live-streams for your enjoyment.  The series launched April 14th, and its goal is to connect us all to the world’s leading artists and reflect the wide range of programming Carnegie Hall offers.  The streams range from Yannick Nezet-Seguin to Ute Lemper to Tituss Burgess to Emmanuel Ax.  These streams are expertly executed, and will dash any thoughts you may have about Carnegie Hall just being for stuffy rich folk.  These performances will bring joy to any viewer.  I was struck by how much humor, quirk, and charm these performers bring to their Carnegie Hall interviews.  You can watch the streams live, as well as recordings, of past streams here.

For friends who prefer a more a more indie cabaret scene, SubCulture offered a Jason Robert Brown concert. Jason Robert Brown might not be a household name for a non-musical theatre crowd, but let’s just say he discovered Ariana Grande.  In the musical theatre world, he is known for being a brilliant composer whose masterpieces include Parade, Bridges of Madison County, and 13.

Showcasing the theatre community’s endless innovation, there are now ways for you to interact with the New York City theatre scene.  A New York City staple for any musical theatre lover is a stop at Marie’s Crisis.  On a normal night, this West Village piano bar is host to a colorful array of musical theatre personalities, from lively fans to Broadway stars.  Accompanied by live piano, they serenade the crowd with showtunes ranging from Show Boat to Hamilton.  The venue might be closed for safety purposes, but the music plays on.  Nightly, the pianist of Marie’s Crisis will be performing live so that you can sing along from home.  To have access, you must join the Marie’s Crisis Facebook group.

It might not replace the actual atmosphere of being at Marie’s Crisis belting your face off, but it’s a wonderful way to get a slice of New York City wherever in the world you may be.

I will be honest and say nothing will ever match hearing the musical vibrations of the Met Opera Orchestra tuning up, or sitting down at 54 Below to watch my friends perform while I eat the best macaroni and cheese in town, but there is a very special beauty in these live broadcasts.  To begin with, most are absolutely free.  For this girl with champagne tastes and a tapwater budget, that is a magical thing.   These broadcasts are also accessible to people all over the world.  If you are a theatre fan stuck in a town that lacks a theatre scene even on its best day, virtual programming gives you an opportunity to see the best New York City theatre at the very same moment as the New York audience.  It also shows how incredibly diverse the offerings of the New York City theatre scene are.  There is truly something for everyone.   And best of all, for the first time that I can remember, the latest show at the Met becomes *the thing* everyone talks about.

Because of Covid-19, We have seen how much the art matter.  While we are truly going through trying and traumatizing times,  we have seen the arts heal, unite, and inspire.  I am grateful for how the theatre community has truly shown that while we may not be able to gather, the arts are an essential service.

As a last note, many of these theatre offers were originally created as fundraisers.  If you are in a position to give, I strongly encourage you to.  These are wonderful organizations doing even more wonderful things to keep people healthy and safe.  Thank you!

Which Museum Should I Visit?
Black Lives Matter March, Harlem, June 7th, 2020
So…What CAN I Do to Experience NYC Right Now?
previousBest Bakeries in New York | NYC Foods You Must Try
nextTour Guides and Covid-19