Home » What to Do in Times Square

What to Do in Times Square 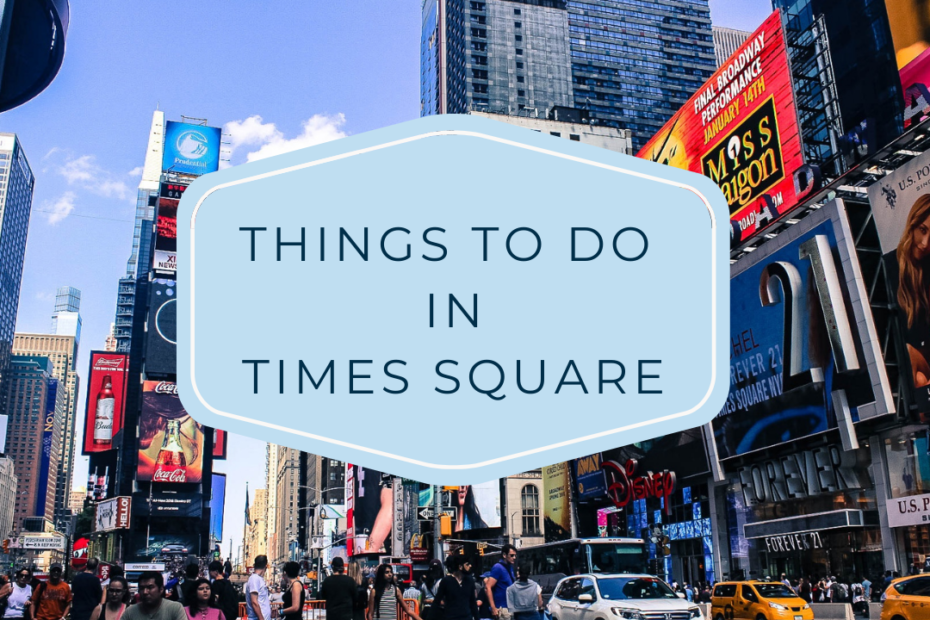 I was giving a tour to a lovely group from Texas who was given a lot of free time in Times Square. One of the chaperones asked me, “What is there to do in Times Square besides eat and shop?” I quickly jotted down this list for them. It does indeed have food and shopping, but also some cool museums, sites, and activities!

There is a food hall there and if you love seafood I highly recommend THE OYSTER BAR in the terminal.

The Grand Tour meets each and EVERY Friday throughout the year at 12:30 pm in the atrium at 120 Park Avenue, located at the southwest corner of East 42nd Street and Park Avenue directly across from Grand Central Terminal. Again, no reservations are necessary

GCT offers their own audio tour at a fairly affordable rate. The advantage here mainly that it’s offered in multiple languages.

The Chrysler Building (gaze up at its exterior or go into the west lobby for a glimpse at the last!)

Considered the back yard of Times Square, Bryant Park boasts a Carousel, restaurants, food stands, and all sort of fun activities from board games you can rent to performances by Broadway stars. In the winter time there is an ice skating rink and a winter village. In the summer it hosts a series of events such as “Broadway in Bryant Park” and outdoor movies. To find out what is happening during your stay, check out their site: https://bryantpark.org

The Schwartzman Building of the New York Public Library is attached to the east side of the park. It is gorgeous.

If you go to the children’s section you’ll see the original Winnie the Pooh! There is also the beautiful Rose Reading Room you can visit on the top floor. Just before the Rose Reading Room is the McGraw Rotunda with beautiful murals, created during the Work Projects administration, depicting the history of the written word. They also offer tours of the building.

This iconic building is home to NBC Studios, Top of the Rock, The Rink at Rockefeller Center, a lot of fun shops such as the Lego Store, Nintendo Store, and FAO Schwartz, and some of the most beautiful public art in NYC. In addition to NBC Studios tours, Rockefeller Center also offers tours of the complex that will disclose the secrets and beautiful history of the building and the public art.

Home of the Radio City Rockettes, and frequent location of the Tony Awards and NFL Draft, you can see a show at night (and sometime even during the day!) as well as take tours of this incredibly iconic and stunning building.

St. Patrick’s Cathedral is the largest Neo-Gothic cathedral in North America right across from Rockefeller. If you go inside you will be treated to one of the most beautiful Cathedrals in the world, and on any given day you could see a service, a concert, or a wedding. Be courteous as it is an active house of worship. You can also download an app that will give you a guided tour of the building.

The “Red Steps” at 47th and seventh is the BEST place for photo taking in Times Square. (Underneath it is the TKTS Booth where you can buy half price Broadway and Off-Broadway tickets!) .

This fire station is nicknamed “Midtown’s Finest.” They were one of the first responders to 9/11 and lost more members than any other fire house. They will often have their doors open and are happy to chat and answer questions. You can read more about their heroics in this NY1 article.

This avenue has great restaurants of every type of food you can imagine and good lunch specials! This is where real New Yorkers go to eat. My boyfriend and I frequent Obao and Room Service because we love Thai, and Rancho Tequileria when craving amazing Mexican, but everything you see will be great!

This is the best cheesecake in NYC!!!!! There are two locations and in Times Square!!!! Also a sit down restaurant with decent sandwiches!

New York City loves food halls. City Kitchen has several food offerings, including a Luke’s Lobster, Dough Doughnuts, and Whitman’s where you can get a burger topped with peanut butter, which is way tastier than it should be.

NYC burger chain with delicious custard for dessert. Download the app and order before you head over so it’s ready for you to pick up and you can skip the line! (There is a location on eight avenue and 44th street and a location in grand Central Terminal.).

I’m not gonna lie – I really dislike the food but it gets a lot of fans because there are really talented singing waiters who dance on your table.

This is great for the theatre fan as many theatre celebrities frequent this restaurant and the walls are lined with caricatures of Broadway stars.

One of the most current “New York” things I can think of is crazy food concoctions like pancakes covered in macaroni and cheese and giant milkshakes topped with cotton candy and pie. MOM’S of Astoria has a Hell’s Kitchen location and excels at these fun creations.

This is the official cookie of Broadway. Seriously delicious cookies with fun flavors. The lines do get long just before and just after Broadway shows. It moves relatively quickly and the yumminess is well worth the wait.

This was made famous by the TV show Sex and the City. They specialize in cupcakes, but most New Yorkers flock there for the banana pudding.

The actual Cake Boss is out in New Jersey, but there is a satellite store at the Port Authority Bus Terminal.

For anyone who wants to be a spy! This interactive experience is a lot of fun and very educational.

Ripley’s Believe It or Not & Madame Tussauds

These always look super touristy, and they ARE touristy, but they can actually be quite fun. If you buy your tickets online there are often discounts, and make sure you bring your camera for social media posting.

I’m just going to list the most popular stores amongst my large travel groups. If you are souvenir shopping, the best is probably GRAND SLAM, on Broadway between 46th and 47th street. They have a HUGE collection of NYC shirts, mugs, hats, etc… and in the basement they have dollar bins! Everything in these bins is only a dollar which is GREAT for those on a budget.