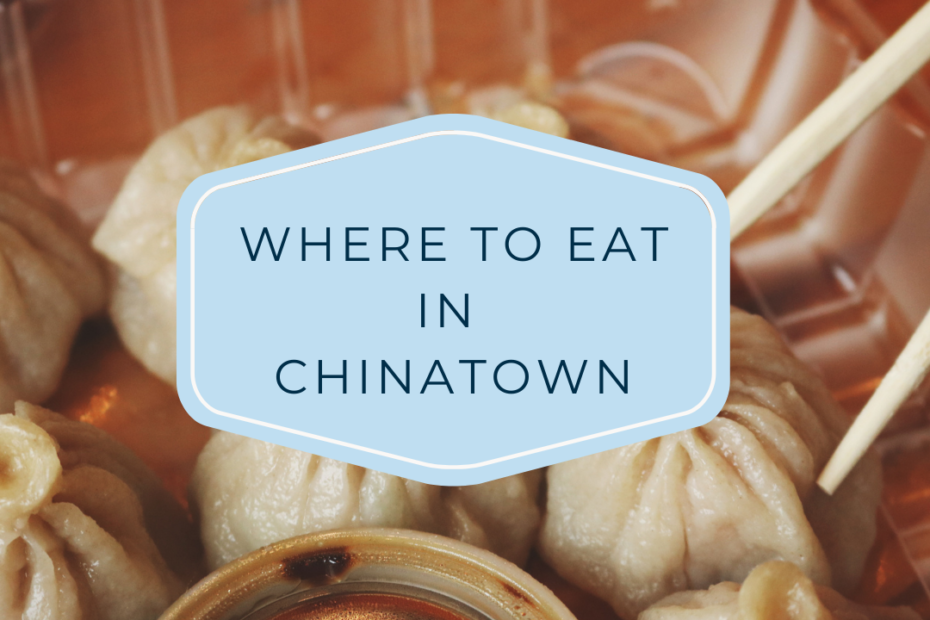 While visiting New York City, visitors always want to eat where the true locals eat. Each neighborhood in  New York City is full of hidden gems, which we are here to uncover for you.

Manhattan’s Chinatown is home to over 90,000 people, and is home to the highest concentration of Chinese people in the Western hemisphere. The neighborhood is brimming with history, and will overwhelm your senses with colorful sites, sounds, and smells. New Yorkers love Manhattan’s Chinatown for the delicious and surprisingly affordable food. Let’s show you where to look for the true treasures!

It’s long been known that the best lunch deal in New York City is the Chinatown dollar dumpling. For just one dollar, you can purchase as many as five delicious pan-fried dumplings.

Some believe these small tasty treats symbolize wealth. They are the same shape as gold and silver ingots, pure metals often used as currency reserves. Dumplings are especially popular during the Chinese new year, when everyone wants to welcome in wealth as they start anew!

Our favorite dumpling stops are Fried Dumpling (106 Mosco Street), Tasty Dumpling (42 Mulberry Street), and Vanessa’s Dumpling House (118A Eldridge Street.) These shops are small, and the untrained eye might miss them all together. They are truly local secrets.

For a special treat, head to Joe’s Shanghai (46 Bowery St) or Joe’s Ginger (25 Pell St) for soup dumplings (Xiao long bao).  These are dumplings with the soup inside the dumpling skin! Each bite presents a burst of brothy flavor that will leave your taste buds singing. But be careful, it’s hot!

Spicy Village (68 Forsythe Street) may look like a humble hole-in-the-wall shop when you step inside, but one taste of their food will make it one of the most memorable dining experiences in New York City.

They are known for the Spicy Big Tray Chicken, which is exactly what it sounds like.  A big tray of spicy chicken. The chili-oil sauce will leave an aromatic taste in your mouth, and the texture of the chicken is perfectly tender.

We also recommend the pancake with beef. We aren’t talking American breakfast-style pancakes here. We are talking fluffy round pieces of savory bread, perfectly crisped on the outside, and filled with juicy shredded beef that’s mixed with a perfect blend of spices.

Sure everything is served on styrofoam plates, but the taste could rival that of any Michilin Star restaurant.

Many claim that the best noodles in Chinatown are those served at Xi’an Famous Foods. (45 Bayard Street.)

Order the spicy cumin hand-ripped noodles with lamb. Each dish is made-to-order. Xi’an Famous Foods sees time and as an ingredient.  The noodles are ripped in front of you, cooked in boiling water, and then seared with home-made chili oil that you will dream about for weeks, if not years, to come. The lamb is a special twist on the traditional dish, and both the spices and texture are out of this world.

Make sure you arrive well before closing. Many locals despair when their favorite spicy cumin hand-ripped (in-demand) noodles with lamb are sold out closer to the end of the day!

The Chinatown Ice Cream Factory is the perfect way to end a day of Chinatown tasting. The Chinatown Ice Cream Factory has been standing at its current location, 65 Bayard Street, for over 40 years. While they offer flavors that are traditional to the Western world such as mint chocolate chip and rocky road, we recommend you branch out and try the uniquely Asian flavors such as wasabi, red bean, and durian.

Experiencing Restaurants During Isolation
Where Should I Eat Pizza?
Washington Square Park History | New York City Ghosts
previousBIPOC Owned Restaurants in Manhattan
nextBest Things to do in NYC with Kids