Home » Where Should I Eat Pizza?

Where Should I Eat Pizza? 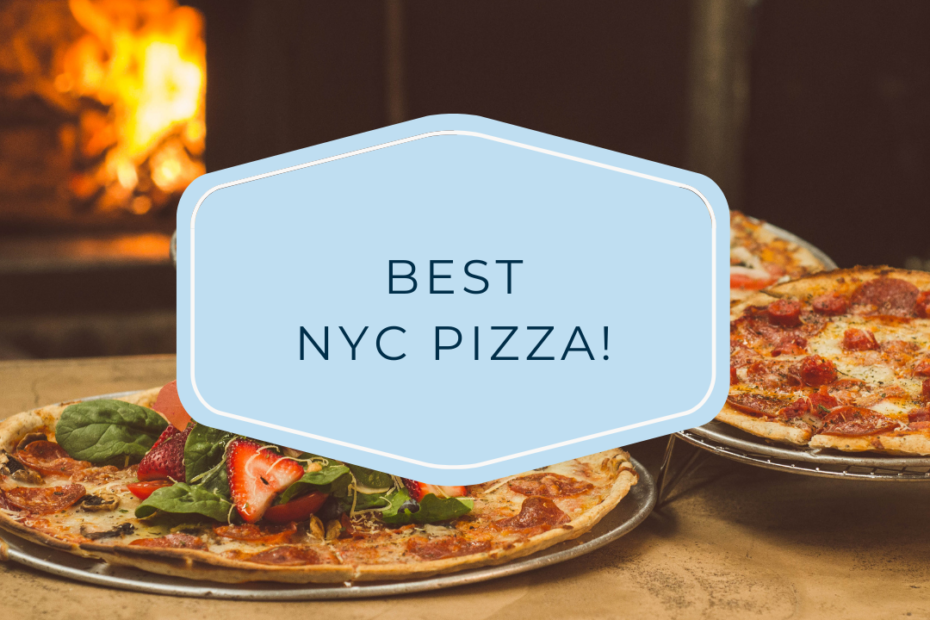 Eating pizza is a must for anyone visiting NYC. We have every type of pizza you can imagine, so no matter what you dietary needs, NYC has a slice for you. This also makes it very daunting to choose a place to eat pizza. THE CHOICES! Thick crust, thin crust, meat lovers, vegan, gluten free, lactose free, dessert pizza – it is all here!

So, the goal of this blog is to tell you MY favorite pizza. Keep in mind, every New Yorker is going to have their own favorite pizza and is willing for a duel to the death to defend their pizza’s honor. The truth is, it is pizza. You can’t really go wrong. So just dive in and enjoy the deliciousness.

This is the first category because it is important to understand what makes “New York Pizza” “New York Pizza.” While I encourage you to eat every slice of pizza that appeals to you, you ARE in NYC and should taste at least one slice of traditional NYC pizza.

Traditional New York City pizza is made in a coal burning oven.

The key element to New York City city is the oven that it is cooked in. If you are looking TRADITIONAL New York City pizza, you are looking for pizza made in a COAL burning oven. The original pizzas in Italy were made in WOOD burning ovens, but, long story made short, NYC just didn’t have a lot of wood so the Italian immigrants used coal instead. The first pizzeria in NYC opened up in 1905 and was so successful that it is still alive and well today – using the same coal burning oven! It is called LOMBARDI’S. You can read all about their history here. So, during your visit, why not go directly to the source of all New York City Pizza and visit Lombardis. It’s a family friendly sit down restaurant and it is quite delicious.

As wonderful of Lombardi’s is, my favorite traditional New York City pizza is actually John’s of Bleecker. It’s in the heart of the Village, so after you stuff your face with their pizza, you can wander the twisty turny streets of the Village and enjoy people watching in Washington Square park. It’s a perfect Manhattan afternoon or evening in my opinion.

I also truly enjoy Grimaldi’s and Julianna’s. They have quite a dramatic history that you can read about here. Once again, long story made short, Patsy Grimaldi is the chef at Julianna’s and uses the oven that made Grimaldi’s famous. Traditionally, tour guides favor Julianna’s and I love it because you can also buy Duane Street Patisserie Ring Dings there! However, in my honest opinion, the pizzas taste exactly the same and you should go to whichever has the shortest line. In the summertime, you call Julianna’s ahead of time for pick up, get your pizza, and eat in Brooklyn Bridge Park while getting a stunning view of Lower Manhattan. If you want to make a perfect NYC afternoon out of it, walk over the Brooklyn Bridge, get pizza at Grimaldi’s or Julianna’s, then get ice cream by the water front.

If you are in Midtown and want you traditional NYC pizza fix, head over to John’s on 45th. This is NOT John’s of Bleecker, but it will get the job done in a most delicious fashion.

While coal burning ovens make TRADITIONAL NYC pizza, they only come in FULL pies and few things are more New York than shoving a dollar slice in your face as you race to the subway!

My favorite dollar slice is actually Two Bros pizza. There are many locations and the cheese pizza is actually only a dollar. (Most dollar slices are not a dollar. They cost the same as a subway ticket, which at the time of this writing is $2.75.). This has caused my friends to dub Two Bros “homeless pizza,” because it sustains us when we are feeling poor and “homeless.” Recently, the owners of Two Bros also opened up UpSide Pizza, which aims to prove that in addition to becoming king of the dollar slice and also create the “best slice.”

My favorite “dollar slice” in the city is Fiore’s in the Village. The slice is $2.75 (which is market price) and is out of this world. The pizzeria also has a very touching story behind it. You can read Mike Fiore’s story here.

I have to mention Joe’s because it is probably the best known slice in NYC and is featured in one of the Spider-Man movies. When I give food tours, this is several guests’ favorite stop, so it is definitely a slice worth exploring. There is also a wonderful little park (Father Demo Square) where you can eat your pizza and observe the crazy humans of the village.

I am a thick crust pizza girl, and as such, Prince Street Pizza is possibly my favorite slice of pizza in the world. Their SoHo square is a thick delicious square slice. If you are a pepperoni lover, get it topped with fresh peppering which curls up and creates delectable pools of grease. This might be one of the best foods I have ever put in my face.

I am also a huge fan of cheese, and cream, and artichoke dip, so I must recommend Artichoke pizza and their artichoke slice. Pizza snobs will tell you this pizza isn’t worth your time, but let me tell you, thick crust pizza topped with the creamiest spinach artichoke dip you can image, topped with ooey gooey mozzarella cheese will turn any frown upside down! It is one of my favorite treats in town.

If artisanal is your jam, consider going out to Brooklyn and trying Roberta’s pizza. They have a few different dining and take out options. Motorino Pizza is another great Brooklyn gem. They imported their wood burning oven from Italy, so you’re getting very traditional Italian pizza here. Ask for the off menu item “pizza bread.”

L&B Spumoni Gardens is another fabulous Brooklyn option. They make great thin slices AND thick crust pizza. My personal preference if their silicilian style squares, but both are yummy.

If you have a sweet tooth, head over to Max Brenner’s Chocolate by the Bald Man. They have dessert pizza! Sugar cookie crust, Nutella sauce, marshmallow and toffee crumble options for toppings – need I say more?

If you really want to taste the best pizza New York City has to offer, and learn really fascinating information about the history of pizza – you MUST take a Scott Weiner Pizza Tour. Every single tour is a life changingly delicious and fun experience. On every tour you will eat at least three slices of pizza. You also get a pizza journal where you can jot down your own impressions of each pizza to compare and contrast. I can confidently say these are some of the best tours on any topic that I have ever taken and encourage everyone visiting New York to join one!

Why You Should Attend the GANYC Apple Awards
Should I see SIX the Musical on Broadway?
Ten NYC Tourist Traps That You Must Not Miss
previousWhich Bakery Should I Visit?
nextWhich Museum Should I Visit?